How many colours do you need to visualise data scored on a five-point scale?

If you went with the obvious answer of five colours, here’s what you get:

The green and grey figure wins in two ways. First, it tells a story: about a third of respondents view Wikipedia favourably. (Although there are other interpretations of the data shown, a good figure emphasises a single message.) Second, the grey and green version just looks better.

Colourful data visualisations aren’t bad, per se. But now that it’s easy and common to use colour in scientific papers, there’s a risk of overuse. Avoiding catastrophe becomes the first principle in bringing color to information: above all, do no harm as Edward Tufte asserted back when personal computers were first becoming mainstream. Stephen Few echoed this sentiment in 2004: Through the magic of computers, the creation of tables and graphs became easy—perhaps too easy.

Deciding on attractive colour palettes for scientific figures is subjective and difficult. I have two go-to methods. The first is methodical, based on matching saturation and lightness, but it can still be fraught with trial and error to reach an aesthetically pleasing outcome. The other is to use a limited colour palette. Hence, the title of this post: combining grey with one other colour is a foolproof method for picking a sophisticated, yet simple colour scheme.

Despite its simplicity, the combination of grey with an another colour isn’t only a crutch for scientists who may lack an eye for design. Nor is it a lazy approach. Instead, using grey and one other colour is a sufficiently professional design tactic that once you start looking for it, you’ll see it everywhere.

You’ll see it in dashboards like Github’s commit activity plot:

You’ll see it in infographics:

You’ll even see it in kitchen designs and wedding photos.

Importantly, you’ll see it promoted by people whose job is data visualisation. People like Stephanie Evergreen and Vidya Kesavan. I’m linking to their specific posts that inspired the stacked column chart presented at the start. (Also check out the New York Times Graphics feed for more grey-based creations).

My job is also data visualisation in that it’s a built-in part of being a scientist. So, am I practising what I preach? Do I actually use the suggested colour scheme of grey and another colour? Yes. I rely on this scheme every time I create slides. As for figures, I’ve been using this scheme at least as far back as my Master’s thesis in 2013:

An even better example from the scientific literature comes from MacKinnon et al. Their figure below exhibits a dozen different processes, yet there is a clear grouping through the judicious use of grey and blue. 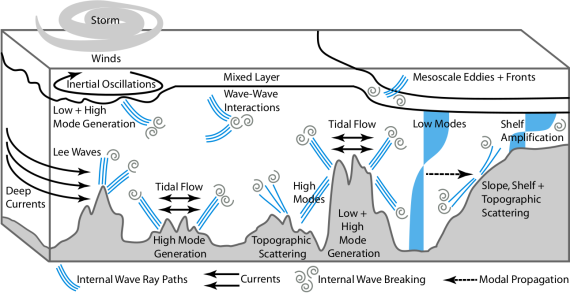 Here, using blue for the internal wave makes these the focus of the figure. Indeed, the accent colour will always be the focus. Use that to your advantage. Want to highlight a specific datapoint? Colour it and set everything else to grey. Think of it as adding make up.

The astute reader may recognise that the four grey bars needn’t be grey. Four pink bars surrounding the orange one would still highlight Team D. Except, not only is grey the obvious choice to indicate data of lesser relevance, it is has numerous psychological associations that lends itself to science: neutral, balanced, calm,  mature, dependable, serious, unemotional, and practical. I could, of course, spin my argument for grey in a negative light with other associations:  dreary, drab, and depression. Perhaps, then, the best summary is one that captures both sides of this argument—although grey is not a glamorous colour, it’s elegant.

Not glamorous, but elegant. There’s a byline to aspire to in all aspects when we present science.

One thought on “Grey and one other colour: a foolproof colour scheme for scientists”